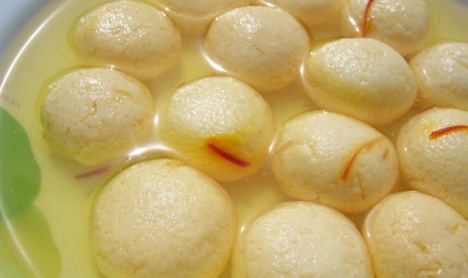 The Indian’s engagement with ‘mithai’ or sweets is very well documented, over the ages. And, the Bengali obsession with mishti (sweets), is well-known, which puts the rasagulla at the top slot. The impression was that that ownership of this variety of sweets lay with Bengal. Strangely, a tussle for the ‘rasagolla’ between two states – Bengal and Odisha came up a year ago, in July 2016 with Odisha celebrating ‘Rasagolla Day’! ‘Rasagolla Dibas’ was actually a claim that the unique sugary mithai was originally from Odisha, which was aggressively combated by the state next door – Bengal. Odisha celebrated the event for the second successive year on the occasion of Niladri Bije.

Social media users went the extra mile to celebrate the occasion and a famous artist Sudarsan Pattnaik created a sand art on the beach in the popular tourist spot – Puri. Twitterati had a hay day, for there were tweets that followed like – May your life be more sweeter than Rasogolla. And remember Rasogolla origin is Odisha not WB #RasogolaDibasa #JaiJagganath #HappyEating.

Now, this tug-of-war between the states over the rasogolla has reached a new height – with Odisha announcing  that they want GI tag (an intellectual property identifier for a product) for their own brand of Rasagolla. Tagging a specific geographical location does not imply monopoly, for the GI registration for Bengal’s Rasogolla in no way affects the claim for GI registration of Odisha’s Rasagolla! A happy state of affairs indeed!! Incidentally, GI is a sign used on certain products, which corresponds to a specific geographical location or the origin and the product, which also possesses qualities or reputation that are true to that origin.

Historically Odisha’s claim to ownership is supported with evidence, it seems. There are historical mentions of the sweet’s association with traditions and practices associated with Lord Jagannath.

From one obsession to another. Art has engrossed, enthralled, fascinated generations and we have read gripping tales of intrigue that were immersed with pure enchantment and mystery too. Flashed in the news recently, was the sale of a rare Da Vinci painting. It sold for $450 million, which was a smashing auction record.

The painting, “Salvator Mundi” (Saviour of the World), depicts Jesus Christ. Significantly, it is one of only sixteen known Da Vinci paintings in the world! Most of those that remain are in European museums like the Louvre, which houses his most famous work, the “Mona Lisa,” painted around the same time in the early 1500s.

It was the first ever public sale of a Da Vinci painting, according to Christie’s. And it had art lovers spellbound.

So great was the mesmerizing power of the painting that prior to the sale, that both Christie’s and the seller went to great lengths to prove the picture was an authentic Da Vinci. Da Vinci scholars in Milan and Florence, and curators at the Metropolitan Museum of Art in New York and the National Gallery in London, scrutinized the piece of art to come to the conclusion that it is authentic.

Adding to the mystique was the mystery of “Salvator Mundi”’s journey, which is bewitching and captivating. From the collection of the French royal family, which also may have commissioned the painting, it migrated in the 1600s to England, along with a princess who married into the British royal family. Then for more than 200 years, the painting disappeared from public view, and when it resurfaced in 1900, it had been painted over and was thought to be a copy. It was not attributed to Da Vinci at the time, and soon it was sold privately in 1958 and disappeared again. It was rediscovered in 2005 at a U.S. estate sale, where three New York art dealers acquired it for $10,000. They sold it to a Swiss businessman, who in turn sold it to the Russian billionaire who parted with it.

Not disclosing the name of the buyer, Christie’s acknowledged without a doubt, that the “excitement from the public for this work of art has been overwhelming and hugely heartening”.

The ‘push’ and ‘pull’ of Valentine’s Day

Drawing up an advocacy plan