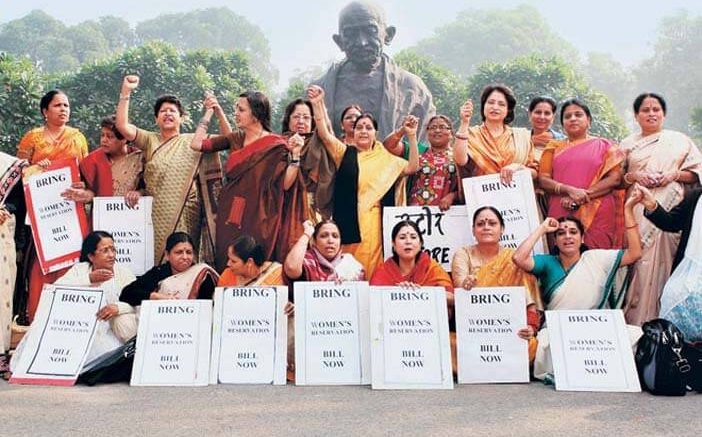 In India’s first general elections, 23 women were elected to the Lok Sabha out of 489 members. In the last general elections, 69 of 545 members of those elected were women. That is representative of a marginal increase of women in Indian politics over 60 years. Especially given that our republic was formed with universal suffrage, and voter turnout of women has been substantial. 2014 General Elections, the female voter turnout was higher than male turnout in 16 states and union territories out of 35.

This limited participation of women in Indian politics becomes more crucial with time. Research has shown that larger representation of women in legislative bodies leads to better policy making and delivery. Within Panchayats, for instance, the number of drinking water projects in areas with women-led councils was 62% higher than in those with men-led councils, and the share of incomplete road projects under Pradhan Mantri Gram Sadak Yojana is 22% lower in female-led constituencies, reveals a study by Ideas for India. Not to mention that historically, women legislators are three times less likely of having criminal charges than their male counterparts. So they bring in less criminality into legislature, while simultaneously increasing women’s ability to demand effective delivery of their economic rights. This focus was highlighted in the Economic Survey of 2018, released exactly a year ago and carried a pink theme to emphasise on women empowerment and gender inequality.

Despite that, women representation in legislature remains low.

Share of women in Indian politics becomes lower in state legislative assemblies. Of the 4,118 MLAs in 2017, only 9% were women. And among them, the highest percentage of women legislators come from Bihar, Haryana and Rajasthan (14%), followed by Madhya Pradesh and West Bengal (13%) and Punjab (12%).

Why are there so few women in Indian politics?

One way to look at it is women in active workforce altogether. In 2017, only 28.5% Indian women participated in the labour force, compared to 82% men. Interestingly, it has decreased from 27.94% in 1990 to 24.39 in 2018. Some other reasons highlighted by the Economic Survey 2018 point towards inherent dynamics Indian socio-politics – attitudes towards role of women therein, limited financial and social support, and domestic responsibilities. Political institutions have not really made concerted efforts to address the gap in women in Indian politics. Besides rarely offering tickets to women candidates, most political parties have done the bare minimum in grooming women for leadership positions or involving them in decision making processes.

What is the way forward?

Despite how crucial gender balancing in legislative roles is, it is the political class itself that doesn’t seem to have done enough. And the power lies largely with them. Constitutional amendments in 1993 reserved a minimum of a third of the seats in local bodies for women. Bihar and Delhi local legislatures have reserved more than a third of their seats for women. More state assemblies could make similar efforts. The Women’s reservation bill, although lapsed in 2008, has been, extraordinarily, kept alive by every subsequent Rajya Sabhas, and was passed in 2010. It is pending passage in Lok Sabha. It has potential to give results. Panchayats, which reserve a third of their seats for women, had 13.72 lakh elected women representatives in 2017, about 44.2% of total elected representatives.

One of the arguments against reservations is that it doesn’t cure the issue, just treats the symptoms. That it doesn’t directly lower barriers for entry or hurdles for women within the political ecosystem. This is where political parties must actively work to create a more conducive environment for women in Indian politics. They can institutionalise efforts that facilitate greater participation of women in political activities – efforts which could stretch from creating safer environments to easier inclusivity. Promoting participation of women at grassroots level, from Panchayats to college level will have to begin, to set the stage for the reservation bill to work. It is up to political parties to set the ball into motion.