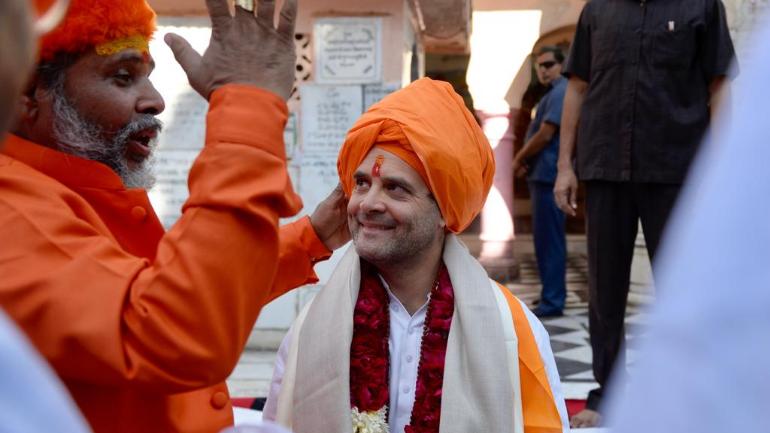 First came nationality (“She’s not even Indian”), then religion (“If 90% Muslims don’t vote, we’re over”), then caste (“Only Brahmins, not Modi”), and now we’re battling over who belongs to which Gotra (Clan). In my previous post for State Craft, I wrote about Identity Politics, and specifically how Tribalism spreads. Such Gotra Politics are a manifestation of Tribalism. Politicians from both the ruling BJP and opposition INC are going back and forth challenging their opponents to produce the names of their Gotra. Normally I would shelve away this type of political discourse between parties, as a pointless bickering.

But I also see a noteworthy difference this time; a trend and an unprecedented outcome. There are many indications that the BJP has managed to set the main narrative for an election cycle that will prominently drive voter sentiment. They are uncharacteristically writing the rules of the game that other parties are following. The most recent indication of it is the Tilak that Sonia Gandhi has decided to wear on her forehead at an election rally.

Why is it unusual for BJP to be in control of the narrative?

BJP has had an interesting portfolio of assets and liabilities since its foundation. 2019 will actually be the first time that the BJP will complete a full term in power, of the four times that it has been the single largest party (1996, 1998 & 1999 being the other three occasions). That’s a remarkable failure rate, the reasons for which are several and range from their underdog naiveté, limited political and financial capital, #CashForVotes, to downright dropping the ball while they’re ahead.

Many of these handicaps were eliminated as Modi and Shah duo ascended to BJP leadership. They brought a quintessential Gujarati efficiency to negotiations, which manifested in alliances, switching politicians and migrating centres of gravity of political power. Very focussed strategies have expanded their volunteer base to make it the largest political party in the world and their coffers have never been fuller. And if a party member thinks of jumping ship (or succumb to #CashForVotes), Amit Shah asserts ominously that they will listen to their “antaratma ki awaaz” (voice of conscience), and change their minds. One shudders to think whose voice that is and what it’s forewarning.

But their control of national political narrative has remained elusive due to their inexperience. It wasn’t the inexperience of managing media relations at a mammoth scale. Upscaling to unreal proportions is their forte. The inexperience was in familiarity and friendliness with the media ecosystem at the centre. This ecosystem was, to a large extent, built during the 10 (stable) years of the UPA (2004 – 2014), and fortified as a result of a mutually-beneficial relationship with the ruling coalition. BJP’s landslide victory of 2014 came as a shocking upset to not just the UPA, but to members of the ecosystem as well. No one saw it coming. No one had contingency plans. Everyone had parked most of their eggs in a single basket, and their allegiance was too prominent. For most members of media, it was too late for reconciliation, the bridges were far beyond burnt; and there is usually no turning back from calling the most egotistical and powerful man in the country, “Hitler”.

How did they turn it around?

How did Congress go from a party that admittedly relies on minority appeasement, to a party that goes out of its way to prove their Hinduness and that of its leader Rahul Gandhi? How did BJP manage to change the game in a direction where they have a natural advantage, in this instance, indulging in Gotra politics?

Perhaps Modi-Shah duo realised from the outset that breaking through this bastion of “Lutyens Media” is an uphill battle. So gaining control of the national narrative was probably not going to be a result of mollycoddling journalists in Delhi. In fact BJP came to New Delhi on a back-foot – limited amicability with media, and a reputation of a predominantly Hindu nationalist party. Instead of trying to counterbalance this reputation, BJP has worked with it. While maintaining Sabka Saath Sabka Vikas (promise of collective development), the party elevated Yogi Adityanath, a Mahant of the Gorakhnath Math, as the Chief Minister of India’s most populous state.

This was a major signal that their ideology will translate just the way it is, into actions and policies. And alongside this signal were several others that typically constitute the right wing ideology; strengthening of the military, bold and disruptive institutional reforms, making subsidy delivery more efficient instead of increasing subsidy etc. It was clear that BJP had no intentions to pussyfoot their way to a repeat of 1999, where Late Atal Bihari Vajpayee’s government tried to present a balanced picture and ended up losing the majority to a coalition, despite being the single largest party.

And this worked. Since 2014, BJP has won elections in 20 states, which has also given it significant control of the upper house of the parliament. As far as their opposition is concerned, they see a correlation. BJP is reinforcing their Hindu Nationalism, therefore they win. That is the premise, which is further reinforced by the BJP. Some national leaders and several regional leaders bring up their Hinduness when contesting against Congress. The reason is that Congress itself has banked heavily on Muslim and other minority vote banks, and even went as far as gearing their manifestos to favour them entirely. This week, Congress released their draft manifesto for Telangana Assembly Elections, which promised seven Muslim-specific schemes, including Muslim only schools and hospitals to be built by the state government, free electricity to mosques and churches etc., if they came to power. This systematic indulgence has given BJP’s regional leaders the opportunity to ask the loaded question – Why such minority appeasement, and what have you done for the Hindus?

Somewhere along this journey emerged the follow up question – How Hindu are you? Which was the point where Congress played right into the hands of the BJP. By choosing to indulge that question, especially the senior leaders at Congress, decided to enter a game where the field is naturally tilted in favour of the BJP. Congress’ handicap is amplified by the fact that their communication at the top level has not been the most coordinated lately. Their Digital Communications Chief, Divya Spandana has had a turbulent journey in that role. The turbulence has now apparently ended up in her being absent from key meetings. Many senior leaders continue to place their foots into their mouths with below the belt and imprudent comments, even provoking condemnation of their comments by Rahul Gandhi himself. Even for the specific question of Gandhi’s Hinduness, one leader called him a Januedhari Brahmin (a practicing Brahmin) while another calling his Gotra to be Dattatreya. And these are just developments of the past few months, roughly six months away from the General Elections.

In summary, BJP seems to have found a spine to stand by its ideology and actions, instead of trying to please those who do not want to be pleased (akin to Modi’s approach in Gujarat). It has decided that if they cannot befriend the existing media establishment, they will create their own (akin to what Lee Kwan Yew’s approach in Singapore). And for the first time in decades, despite being the oldest party, despite nurturing a media ecosystem that heavily favours them, Congress has lost control of the narrative.

The communications function in the corporate value chain

Virtual influencers – the next big thing?