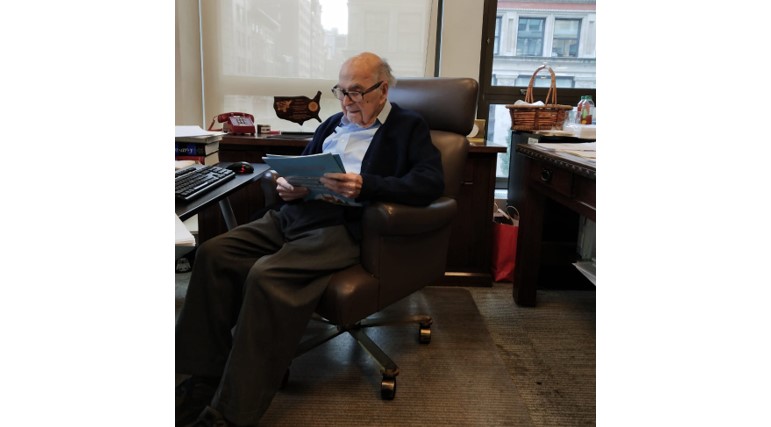 I was fortunate to meet Harold Burson early in my career and listen to him back in 2006 when India hosted the ICCO Global Summit in New Delhi. Last year Harold published his biography at the age of 96 which is a fantastic read chronicling the growth of Public Relations in the last seven decades. I ensured I bought a copy as soon as it was released and wrote a review soon after.

I sent a mail of appreciation to Harold and to my surprise he acknowledged the mail. Actually, no surprise there. I built on that communication thread and on knowing I would be in the US this October I requested Harold for a meeting, so I could spend a few moments with him and also get the book autographed. As a hobby, I collect author-signed copies of books that I buy and get them autographed myself. So, this would be an added treasure in my collection. 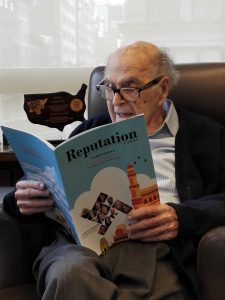 Harold was quick to respond, and his assistant set up a time for us to meet at noon on October 26th. The 97-year-old comes to office every alternate day and spend time at his desk until noon. I reached his office in New York City at the designated time and was ushered in by his assistant. Harold was warm and welcoming as he was busy sipping his iced tea. He chatted with me enquiring about various aspects of India including sharing his fond memories of Roger Pereira, Prema Sagar and several others. He also rattled the names of all the six cities where Genesis had offices when BM acquired the company over a decade ago. He browsed through a copy of the Reputation Today magazine copy which I carried for him and posed for pictures and selfies. He also shared a video message for Indian professionals which is here. 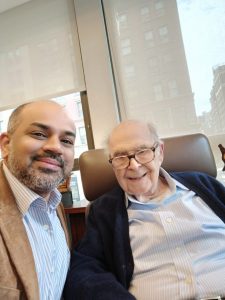 In the thirty minutes I spent with him I was fascinated by the man’s will power to come to office on an alternate day basis. His ability to remember several things at the age of 97 and to treat me respectfully, though he did not need to give me an appointment. We spoke of the future of Public Relations and the importance of the profession in an increasing complex world. He also mentioned how PR firms are moving with the times and consolidating – a reference to the newly created Burson Cohn & Wolfe. He also shared the memories of his few India trips including the first one in 1980, the year I was born.

I will always cherish the precious moments I spent with Harold Burson. At the end of which he gave me his business card. Collectibles like no other for someone who takes pride in Public Relations.