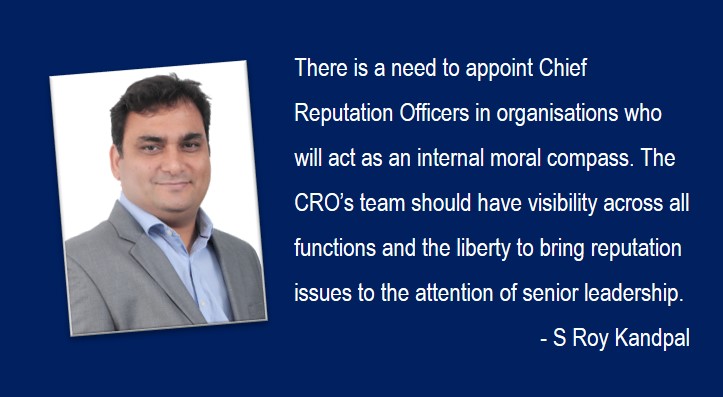 In a complex world with trust deficit, some believe that public relations is 90% behaviour and 10% communication. Ray Jordan, Chief Communication Officer with Johnson & Johnson during its Tylenol crisis adds another element to this mix. According to him, “the key components of a company’s reputation are the same now as they were back in 1986: performance, behaviour and communication.”

In India, performance or not, behaviour is rarely challenged and more often than not you are expected to fix the communication, commonly known as media relations. Even if you make a mistake in any of the above three areas, your character and your identity is inviolable. Only if you start compromising on your identity, it is a slippery slope.

A study by a Berlin-based NGO pegs India as the most corrupt nation in the Asia-Pacific region. The types of corporate scandals in India are fascinating. Dubbed as India’s Enron scandal, the 2009 Satyam scam shook the Indian investors. And this continues to happen. The list is endless from loan defaulters to embezzler of funds.

Communication teams cannot control the things that go on in the company or for that matter behaviour of their leaders or thousands of employees. However, it will be an error to assume that they will not be held accountable for the reputation damage that it may cause. God forbid if as a communications professional you are caught up in one of these companies where a leader or a company’s morality is under scrutiny.

Plato thought that it was impossible for rational beings to knowingly do wrong. However, Aristotle and many Indian thinkers believe that people do in fact act against their moral convictions and this is an unhappy fact about ourselves. Gurcharan Das in his book, ‘The Difficulty of Being Good’ – a study of Mahabharata – proposes that there is a subtle art to dharma and there may not be easy answers. Interestingly, he posed the same question, why did the founder of a very successful company commit one of the greatest frauds of all time? He had everything going for him – success, money, fame and power. Why did a person of such an extraordinary achievement turn to crime?

The Mahabharata seems resigned to this pessimistic view, which Immanuel Kant, the 18th century German philosopher, expressed famously in these words, ‘Out of timber so crooked as that from which man is made nothing entirely straight can be built.’ Even though it seems unattainable, Yudhishthira in his final ruminations says ‘Dharma is recognised by men to be the ancient quality of compassion for the welfare of all creatures.’ Thus, he arrives at the moral point of view, which is an ability to think beyond oneself.

Roy Vagelos made a lot of money for Merck, but that’s not all he did. Against everyone’s opinion, he donated the drug to millions of people for decades to come, to defeat river blindness, which was one of history’s most devastating diseases. According to him, you cannot accomplish anything without being able to motivate people. Over a period of time you can only do that by the force of who you are and what you stand for. Academicians in communications call that one’s “personal brand”. Profits are not a tradeoff. It is possible for a company to do good and do well. Kant in trying to understand the sense of duty said, “When moral worth is at issue, what counts is not actions, which one sees, but those inner principles of actions that one does not see.”

We will never be able to predict or control human behaviour. However, what we can do is safeguard our interest. Arthur W. Page Society squarely puts the responsibility of defining and activating the corporate character with the corporate communications role. However I suggest we make a distinction between marketing communication, public relations and reputation management, although these are merged within corporate communications today. There is a need to appoint Chief Reputation officers in organisations who will act as an inner moral compass. This has to be outside the PR (publicity) department. At the leadership level, they should be able to make executive decisions that shape the actions of the organisation. The CRO and his team should have visibility across all functions and the liberty to bring reputation issues to the attention of the CEO or even the Board.

According to Page society, in a dynamic and changing business environment corporate communications has to take on the role of an integrator, a systems designer, a master of data analytics, a publisher and a developer, a student of behavioural science and most important of all, a curator of corporate character. The idea of Public Relations is being caught while doing good and not the other way round.

The humble hero must walk the talk

#TataStories: 40 Timeless Tales to Inspire You

In Conversation with Shelley Spector