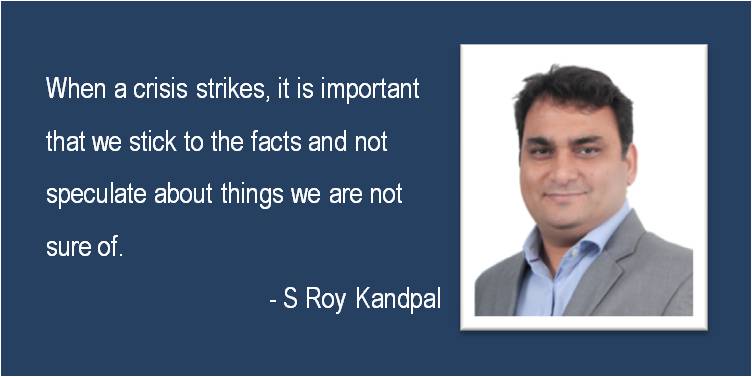 During a crisis, PR consultancies may often be asked to stop or alter a story. The long held idea of a P.R.O was someone who can fix things, someone who can keep a few members of the stakeholder group happy so favours can be exchanged. A few years ago knowing journalists and getting things done was a reality. In some markets, this is still an acceptable practice. Communication professionals try to reason, cajole and sometimes even threaten the media in an attempt to influence their story. But during a crisis, there are many facets to a developing story that the last thing you can do, is keep a lid on it. Crisis is the time to try and control the messaging in order to control the media stories. However, amongst different stakeholders there are sceptics and known detractors who fuel the story and the very idea of control is ridiculous.

There is also a possibility that a crisis is not an event but a sequence of related events. For example for a car company, accidents can happen one after another. The reality moves much faster than their response to it. And companies feel it is better to avoid the media as they don’t know what is coming their way. Some of the common mistakes made during a crisis are:

Companies avoid media during the initial stages of a crisis and if at all they decide to communicate, they do it through press statements so they don’t have to answer uncomfortable questions. But this behaviour does not inspire confidence.

Be available. Be open about what you know, what you don’t know and explain the measures you are taking to find out. The irony is that media always explores all angles of a story irrespective of whether you participate or not. In such a situation the best thing for a company during a crisis, is to be available, dispel rumours and confirm facts.

The biggest question during a crisis is the admission of guilt. Companies are either ill prepared in the areas that they are most vulnerable to or have ignored the warning signs. Most issues develop over time and can be spotted early. Therefore avoiding or delaying accountability is a poor strategy. Maria Sharapova called for a press conference and announced her error of consuming performance-enhancing drugs. She suffered less damage compared to Tiger Woods, who took 4 months to come clean. He was pronounced a serial cheater much before he decided to admit his fault and there was no coming back from that.

Even Toyota ignored complaints of a faulty pedal. It was only after nine years that the company accepted the error. By then it was too late and there was enough reputation damage done.

Arthur W. Page Society’s research has declared that absolute truth is necessary for trust. And telling the truth is a decision. And in the midst of a crisis, making a decision is not easy, especially in large, global organisations as there are complex power structures who have differing views. The common assumption is that the problem will go away if it is ignored and that the public memory is short.

Let us assume that the company is actually guilty but refuse to own up. Again, Page Society defines the role of a Chief Reputation Officer’s (CRO) to identify the defining characteristics of an organisation and amplify it. This is based on the assumption that a company and its character are both good. But what if the rot is set from within and the company is guilty. We know from many examples in history that deep character flaws are finally exposed and therefore bad character leads to bad reputation even if you come out of a crisis successfully.

The second possibility is that the company is partially responsible. Owning up to the error and providing an understanding of the ecosystem, will lay a foundation of trust. In this case it makes even more sense to be available and tell your story. In a developing crisis while there are a lot of opinions and explanations floating around it is important that your side of the story is heard. What you did is known. How you acted responsibly is explained. And audiences understand that you did whatever was possible within reason.

Often during a crisis too much energy is spent on controlling the stories that others are telling and very little on telling stories that will reveal positive aspects of a company. It is ironic that a crisis that calls for the company to be bold, action oriented, leading from the front, open and available, actually, cripples and puts them in a shell.

There are also situations when you are in an actual conflict with a stakeholder such as worker unions, environmental agencies or even a customer. There could be ramifications of business decisions that are undertaken. Therefore it is important for a CRO to be part of the decision making team, so they can evaluate the long-term impact of that decision and if ever they have to defend the company’s stance, they can bring objectivity in their communication. PR teams should not be called at damage control stage. PR needs to be part of the decision, so the impact of these decisions receives appropriate communication support.

When written in Chinese, the word crisis is composed of two characters. One represents danger and other represents opportunity. A crisis soon becomes a crisis of decision making, a crisis of non-availability, a crisis of accountability and a crisis of confidence. A key characteristic of crisis is that you cannot control it and maybe that’s why you call it crisis management.

Many organisations and brands have paid the price for not being crisis ready. Edmond Burke once said those that cannot remember the past are condemned to repeat it.

Be the first to comment on "Crisis of confidence"