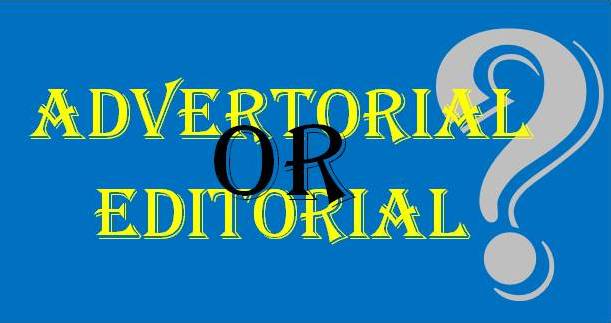 Look at Public Relations today – it is changing quickly. Anyone can be an influencer nowadays, especially with the engagement with digital media. PR influences people’s perceptions and advertorials are great opportunities. While we, as PR professionals go all out for ‘earned’ media for our clients, we should also look at advertorial opportunities or ‘paid media’.

Sometimes, agreeing to go ahead with an advertorial and paying for it, can open the doors to some benefits. It can ring in earned media and not just that, additional opportunities can open up, down the line. It has been noticed that organisations have bought advertorials and have gone on, to build a relationship with the publication, such that they would later reach out to include them in future news stories or features. In short, if you make a budget for it, advertorials can prove to be great opportunities. And, they are still very much considered PR!

Just as ‘news’, advertorials look credible and provide a means for a third-party, apparently neutral, “expert” to state a position or support a product. The “ad” angle here means that the space (in the magazine or newspaper) has been paid for, thus the client is assured of the coverage. From a PR point of view, the coverage is not always assured. Surprisingly, many people cannot point out the difference between ads and editorial, it does logically seem like advertorials can work.

It’s difficult to define, but ‘editorial’ is generally considered to be content that appears in media – in a newspaper, news channel, magazine or online as in a portal.  And, content that is journalistic keeps the ‘news peg’ upfront, and is considered timely, relevant, topical news. Editorial, historically cannot be paid for and as a client, you cannot demand when and how it should appear or highlight any angle in the story or how it’s covered. Topics vary greatly depending on the publication. But, one must keep in mind that what is interesting to one paper, magazine or site, may not be interesting to another.  Companies do not control the final content, which is why they often pitch to multiple media.

Today, we have the bloggers, who receive press releases from brands, but whether they will write about it, is not clear. There’s no guarantee, as it is the case in a newspaper or a magazine. When press releases are sent to media – for events or for general news, chances are that the journalist will only consider it, if it provides ‘value’ to the readers. Same thing goes for reviews – for products, food, events, books or movies. If reviews are paid for, it can make the writer biased, and, the company can call the tune! And, more so, it can lose credibility.

The rule is – if you are paying for it, you are guaranteed coverage. Then, you could argue that the so called “article” now loses credibility as it is biased and contains all – encompassing brand message. But what is important to many brands is that the message is out there – in print!

The main thing to remember here, is that companies are always trying to garner publicity for their brands – so that the brands can remain in public eye. The most common approach is to start with free PR and then move on to advertise.

Pay-for-play will dominate PR in the coming years

Paid editorial spaces for corporates … Sure, why not?

Be the first to comment on "Earned media or paid media?"