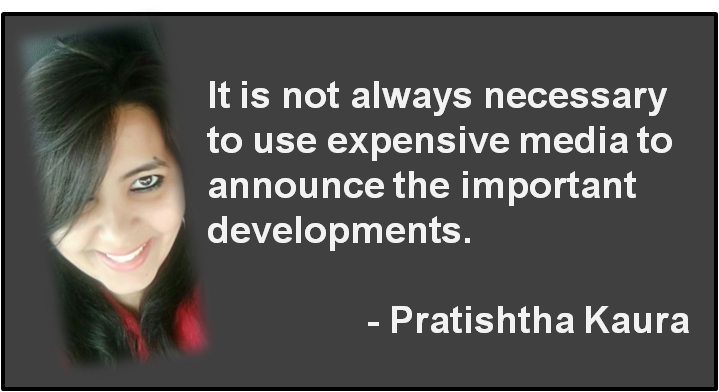 ‘There’s no such thing as bad publicity’

The past month saw a head-spinning conversation originating around an upcoming movie. Yes, I am talking about the grand publicity that the movie Udta Punjab seized a few days before its release. The war between Anurag Kashyap and Pahlaj Nihalani went wide when the Censor Board ordered as many as 89 cuts in the movie citing the reasons that it defamed the name of the state Punjab and projected the government in bad light. However, it was finally passed by the Bombay High Court two days before the release with only one cut. Nevertheless, the conversation sparked by the entire controversy across the various forms of media, was enough to pique the curiosity of everyone.

There are a few B-Schools who want PR case study to be formulated on how an opinion war and a perception battle was fought before the release of Udta Punjab. This entire issue gave the communication professionals, some major learnings on how to steer a sparking conversation with almost everyone forming a part of that. Let us have a look at them.

Here comes the first and foremost learning – the importance of good research cannot be understated when coming up with any type of communication project. In fact, extensive and in-depth research forms a foundation of a good campaign.

This defines another learning – it is not always necessary to use expensive media to announce the important developments. Social media, in today’s times, is enough for the news channels to flash those ‘Breaking News’ and even stronger than the primitive tools.

The learning – influencers will talk about the subject if the message carries paramount significance. They will ensure that it is communicated to the audience at large and will make it a part of their conversations.

The learning – earned media is still known to create a better impact and a wider reach with an increased level of credibility. Also, it is worth mentioning here that the rise of user generated content cannot be ignored. This, in fact turns consumers into brand advocates further spreading goodwill through positive word of mouth for the brand.

This makes us come to the conclusion and the learning that during the time of crisis, it is very important for the entire industry to stand together and fight against the common issue that the industry is facing – here, the issue being the censorship to curb the freedom of creative expression.

For us as communication professionals, there are situations when crisis hits a particular sector and we try to resolve it by taking the brand-focused approach, however the impact can be much wider in handling the crisis successfully if the entire industry comes together to take it head on. The latter situation is not only difficult to advise to the clients but is even tough to execute for the obvious reasons – every other brand in the industry is competition and standing with the competition in the middle of crisis can be a tricky and a risky situation. Hence, the PR recommendation will always depend on evaluating the crisis situation and formulating the strategy accordingly.

What are some learnings that you can think of? Would love to hear from you. Please comment here or tweet at @PR_wali

Lifestyle 2.0: How lifestyle brands are leveraging technology for consumer outreach

From Dearth of Mentoring To Reverse Mentoring: Finding Yourself the Right PR Mentor

Tech made me do that – How user interfaces affect habits

Building trust is at the core of public relations