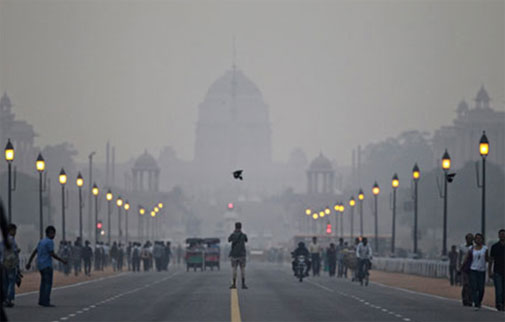 “Death by Breath: What’s happening to Delhi air, will have you gasping for breath”, said a leading daily headline. Statistics had already thrown up the fact that – Delhi is the most polluted city in the world and the peak time is around Diwali.

As Delhi was gasping for breath, the Supreme Court announced a ban on the sale of fire crackers in the city, to analyse its impact on air pollution. Initially it gave the impression that the city did get engaged with the ban. We felt the message was indeed taken seriously, as we did experience substantially less fireworks till… the day before Diwali. But on D-Day, the scene took a 360 degree turn, as several parts of the city exploded with crackers.

Dilli did not buy the message, it seemed. Post-Diwali, Dilli was still gasping for air. The ban seemed to have had no impact. According to data released the day after, it revealed poor quality of air in the capital city. And it was not just Delhi, closer home – Gurugram, Noida and Ghaziabad faced similar situations, where burning of crackers happened like every year; other metros like Mumbai, Chennai also witnessed shooting up in the levels of pollution. Post Diwali, Delhi air quality had reached ‘severe’, and ‘hazardous’ levels in many parts of the city, raising questions on whether the Delhiite actually got engaged with the ban? However, there appeared to be a ray of hope – the quality of air in Delhi was better as compared to last year!

On the other hand, Diwali wishes poured in. Prime Minister Narendra Modi extended his Diwali greetings to the nation. The PM tweeted, “Hearty wishes to the people of India on the auspicious occasion of Diwali.” He also shared a picture with a message – “May this auspicious festival brighten your lives with prosperity and good health and may there be happiness all around.”

International leaders too joined in. Country heads from Donald Trump to Justin Trudeau extended Diwali greetings. One of the earliest people to send out his Diwali wishes was Canadian Prime Minister Justin Trudeau, as he tweeted “Diwali Mubarak”. Incidentally, Trudeau had earlier sent his wishes on Eid al-Adha with an important message on kindness and reflection, on Baisakhi in fluent Punjabi and even Independence Day, when he was given an Indian makeover, clad in a kurta.

Celebrating his first Diwali at the White House, US President Donald Trump shared a video on Facebook, as he praised the contributions of the Indian-American community and pointed out that he valued his very strong relationship with Prime Minister Narendra Modi. In his Facebook post, Trump wrote, “As we do (celebrate Diwali) so, we especially remember the People of India, the home of the Hindu faith, who have built the world’s largest democracy.” His daughter and advisor, Ivanka Trump extended her greetings in a tweet –  “Wishing Hindus, Sikhs & Jains around the world a joyful Diwali.” Indicating that she was looking forward to visiting India for the Global Entrepreneurship Summit (GES), she also shared a picture of US President Donald Trump participating in the Diwali celebrations at the White House.

But, did brands buy the message? Well, brands were certainly engaged with the festival of lights. Like it happens every year. And, they did take strong steps, inviting people to revel in the spirit of the festival.

Believing that Diwali always gives us a reason to celebrate, Amazon launched #Sellerbration – an integrated marketing campaign, dedicated to its sellers. Ghadi Detergent said – Is Diwali #SaareMaelDhoDaalo. Oppo the selfie expert made a bold move, saying the F3 model is the best Diwali gift. Mydala‏ announced a scheme – to take a screenshot and comment below with #DetoxWithZoe, and 3 winners will  be chosen, who could win a #gift hamper from www_zoe_menu. Liberty Videocon‏ was congratulating the winners of #JoyWaliDiwali Contest. “50 years of adding smiles to your festivities” was Vijay Sales. “Light up your Diwali with our stars” pleaded Fiat. This Diwali get salon finish hair at home, said Livon. Utterli, butterli Diwali uttered Amul.

A twist in the tale – mentoring, bending history, getting inked and more

Be the first to comment on "Festivities ushered in mixed reactions"

In Conversation with Matthias Berninger