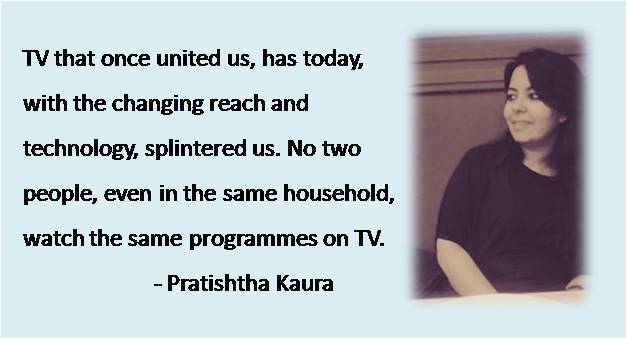 Once upon a time, there was a TV set. We used to sit and stare into it and watch Doordarshan, both known to be synonymous then. This was the early 1980s. As time went by, Doordarshan brought sponsored programmes bringing life to our TVs. It was during this time, that we laughed with Yeh Jo Hai Zindagi, cried with Buniyaad and even worshipped it with Ramayan and Mahabharat. Known as the golden age of Indian television, the TV united us,  every evening into one family, one nation, one channel and one culture.

Cut to today, when everyone is singing the tune of Dabba hai Dabba calling their TVs a dabba if it doesn’t have HD subscription, the nation is witnessing a curious phenomenon. TV that once united us into one, with the change in technology and reach, has today splintered us. No two people, even in the same household, watch the same programmes being telecasted on TV. And while people are consuming multiple types of content on their TV sets in a single household, they are also simultaneously scrolling their news feed on Facebook, Twitter and Instagram.

Which is where the question comes in – with the revolutionary shift in the way we consume news, what are the trends that news businesses are likely to witness? Let’s have a look.

As mobile is becoming the defining device for news consumption, formats and interactions are changing and news organisations need to develop mobile-first strategies instead of just repackaging desktop content for small screens. Video forms a significant part of digital content. This is already become true as The Quint that was launched last year, is preparing content for the digital screen first. Founded by Raghav Bahl and Ritu Kapur, they will soon be launching an electronic news channel in partnership with Bloomberg called Bloomberg Quint, however the content will be created for digital screen first and will then go on television, said Ritu Kapur, co-founder in one of the interviews with Afaqs.

The recently concluded Rio Olympics that had Hotstar as the exclusive digital streaming partner delivered an incremental reach of almost 10 million viewers in India. While this propelled Olympics into the top brackets of sporting events covered online, it also reveals that the consumers are ready to consume the content online if it is of interest to them.

The rise in mobile news consumption is also being accelerated by the increasing adoption of social media sites like Facebook and Twitter. According to Pew Research Center’s The State of the News Media 2015 report, nearly half the web-using adults are getting news about politics and government on Facebook.” The Quint and Scroll have reported to get major traffic from social media.

Why should same news be shared with every individual? With the availability of abundant information in the hyper-connected world of today, a major breakthrough required is to offer customised results to the users according to the their preferences. A few services are already making this happen:

Soon to realise and take a step in this direction has been NDTV, the first Indian news organisation to use chatbots to offer personalised content to the consumers. Globally, the news website Quartz used chatbots for the first time to deliver news in a way that you don’t read the news but chat with it. Yes, that’s true! So, instead of headlines, you get messages; stories are occasionally packaged with gifs and when the app runs out of stories to feed you, it serves you a question like a quiz – news again but in an engaging way.

What journalists are doing to maintain the interest levels?

Amidst all this hullabaloo of information around us, journalism today is much more complicated than it used to be. However, there are a few journalists who are continuously experimenting to make the content interesting for the consumers. For example:

Rajdeep Sardesai, known to experiment with the way content is presented brought prime time edit meeting in the public domain. Using FB Live, the meeting was shown to the world, depicting how are the headlines written and how news is selected for prime time news show.

While covering India’s first Climb Against Sexual Abuse, NGO fighting sexual abuse, Yusuf Omar, mobile editor from Hindustan Times, used Snapchat’s filters while interviewing rape survivors who were under the age of 18, without needing to blur their faces. Snapchat filters known primarily for entertainment among the users, helped him capture emotional accounts of the victims without revealing their identities.

Some time ago, when the media was busy announcing their verdicts on JNU students’ controversy, Ravish Kumar presented an example of unbiased journalism. He questioned the current journalistic practices, criticising the noise being made by the debates on TV and as he spoke all of this, the screen was black with a few key messages on the screen.

While TV channels went crazy to present the PV Sindhu’s victory, Rajdeep Sardesai anchored the moment in yet another classic way. He presented the show playing badminton along with Rahul Kanwal. He tweeted his picture saying “the things one has to do on TV!”

The future of news seems to be very bright with more and more creativity, interactivity and engagement. And it is worth the wait!

The office: Back to the future, or forward?

Going that extra mile … will pay!