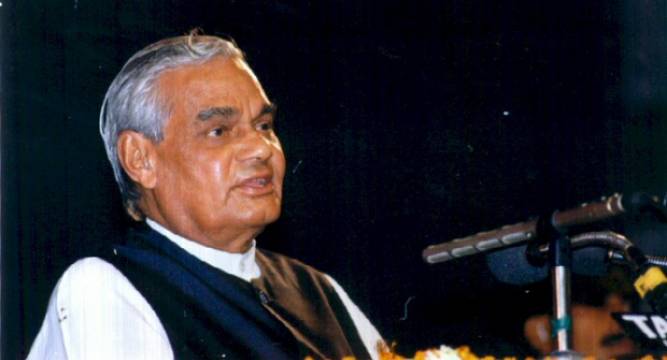 As this post is published, one of India’s finest statesmen – former prime minister Atal Bihari Vajpayee remains critical in a hospital in New Delhi. In his political career spanning over seven decades, he has held the Prime Minister’s Office twice (once for the shortest union government in our History) and the Ministry of External Affairs in the first non-Congress government formed immediately after The Emergency, besides playing instrumental roles in the RSS and BJP, right from the latter’s inception.

He has been more than a skilful politician. His career began in a quintessentially grassroots manner, and he rose as a mass leader. His oration was one of his biggest assets, capable of inspiring unparalleled energy into his followers. It manifested in the form of his ability to invoke a variety of emotions at the right time – patriotism, empathy, rage, humour, passion.

There are countless instances where he has demonstrated the power of his oration, but I personally found his ability to talk about our complex relationship with Pakistan to be particularly skilful. Here we look at some of instances of his emphatic oration.

Vajpayee has an incredible vocabulary (in Hindi and English) which he’s illustrated through his poetry. But quite frequently it gave him the deftness needed to articulate complex ideas.

Here’s an example – his recitation of “स्वतन्त्रता “(Independence) – a poem which was essentially a Message to Pakistan on the Kashmir issue.

While on one hand Vajpayee could be stern as such on this issue, on the other he knew when to demonstrate compassion. In a public rally Vajpayee revealed a conversation he had in Lahore. A minister remarked “Kashmir ke bina Pakistan adhura hai” (Pakistan is incomplete without Kashmir), to which he responded “Pakistan ke bina Hindustan adhura hai” (India is incomplete without Pakistan). This was met with loud applause, and in the presence of Bal Thackrey and members of Shiv Sena, contemporaries not known to be particularly compassionate toward Pakistan, it showed the impact of his powerful oration.

His second and full tenure in the PMO was quite turbulent, particularly in the matters of foreign relations. Under him, India became the sixth nation to join the nuclear club. It is said that the tremors caused by the three Nuclear Tests conducted at Pokharan were felt in Pakistan as well (literally and figuratively). In hindsight it is hard to believe that this was the same year he extended an olive branch to Pakistan by initiating the Lahore Bus Service, which was ultimately followed by the insurgency and the Kargil War.

On two occasions he showed the pragmatism to be able to embrace this turbulence and surmised it very wittily. At an international summit, he illustrated it as such (reproduced from memory):

(We have good relations with every country, except for one. I took a bus there. Little did I know that the bus would end up in Kargil)

When he was asked in the parliament about the connection between Pokhran-II and the Lahore bus service, he called them “two sides of the same coin”.

One of the most memorable moments of his career as a member of parliament is emphatic candour at the end of his term as a Prime Minister for 13 days. Titled “Mr. Speaker, here comes my resignation!” this was largely a spontaneous and brutally frank description of the state of election politics and governance. He reminded the house of the contributions made by his party during every struggle, promised to be a collaborative and productive opposition, and asked for his colleagues across the floor to “introspect in defeat, as we have shown in humility in victory”.

On another occasion during his second term, he once again took to the floor to articulate his counter to Sonia Gandhi’s sharp attacks on BJP’s style of governance. It showed a side beyond archetypal political slander, that he was genuinely hurt. Such instances of harnessing and honestly presenting the human side was essential to his acknowledgement as India’s biggest mass leaders

Andhera Chhatega, Suraj Niklega, Kamal Khilega (The darkness will disappear, the sun will rise, the lotus will bloom) is an often cited expression capturing the rise of the BJP (and perhaps a precursor to a subsequent summary – Acche Din Aney Waley Hain (Good days are ahead of us)). This was first uttered 30 years ago and still finds mentions in conversations, speeches and as rally cries. The simplicity of the message, which was uttered at the end of a public speech, is what makes it memorable.

Are there any other examples of his oration that you can think of? Share with us in the comments below or at Twitter @HemantGaule