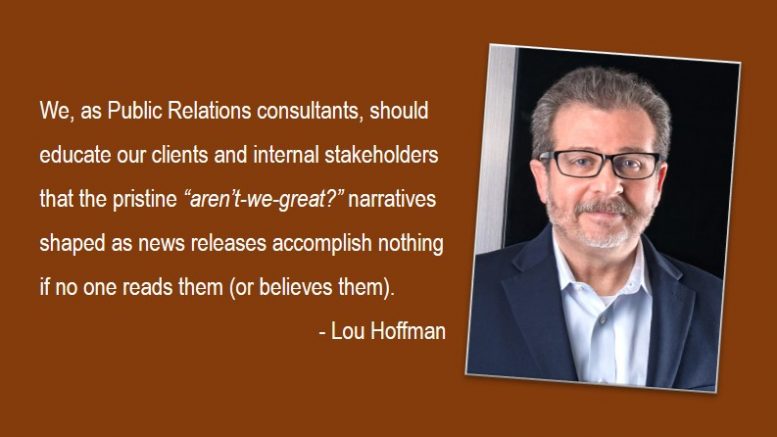 Last month I discussed how the “D” word — as in disruption — will eventually arrive at PR’s doorstep.

While the world around us is being turned upside down, it stands to reason that the tools and approaches that worked 25 years ago might not be a winning combination in today’s environment. Take the humble news release.

When I landed my first job at a PR consultancy roughly 35 years ago, the acronym PR could have just as easily stood for press release, not public relations. The client work largely revolved around announcements, writing the news release, flinging it to the outside world and then trying to persuade journalists into writing stories on the client’s announcement.

For the most part, it worked back then. The media was hungry for news, particularly the trade media that covered the ongoing stream of news stories as a surrogate for the industry’s heartbeat. Fast forwarding to today, PR continues to worship the news release even though its days as a sure-fire way to generate media coverage are long gone.

To understand why, some historical context is in order. The news release will turn 112 years old later this year. How fitting that a train wreck prompted the invention of the news release. A train from the Pennsylvania Railroad went off the rails on October 28, 1906 killing more than 50 people. A fellow named Ivy Lee wrote the first news release on the mishap with the idea that this background information would help the media get their facts right.

What evolved into a system of PR professionals delivering new releases to journalists who then wrote their stories worked like a charm until 1996. That’s when the distribution services that previously beamed news releases to journalists via satellites begin sending out these missives on the internet. As a result, anyone with an internet connection, not just journalists, could access and read news releases. It took time to erode the status quo. Still, with the news release available to everyone and the shift to online information, the internet eventually commoditised the news release.

This also explains why trade publications that feasted on product announcements for many years are going through tough times. Consider the tech sector and a recent study from IDG that asked IT buyers the question, “When searching for tech-related information, how do you measure the value of a tech trade publication versus a vendor’s website?” It turns out the gap between the two is modest. IT buyers don’t need trade publications to stay current on new products. They’ll happily turn to vendors’ websites.

I mentioned this back-of-the-envelope math in last month’s column. Organisations distributed roughly 762,000 news releases in the U.S. in 2015. Figuring 30 hours go into writing a news release — sourcing, writing, adding superlatives, etc. — at $200 per hour puts the total spend on news release creation at around $4,572,000,000 in just the U.S.. As best as we can figure, less than 3% of the news releases produce meaningful media coverage. There’s no doubt in my mind that the same scenario plays out in India and other markets around the world.

Why is the PR business wasting literally billions of dollars?

Old habits never die. Part of the problem lies with clients and internal stakeholders who view the news release as an end, not a means. They enjoy controlling the narrative, which allows for the requisite superlatives and boasting. Still, PR shares the blame. We should be educating these same clients and internal stakeholders that the pristine “aren’t-we-great?” narratives shaped as news releases accomplish nothing if no one reads them (or believes them).

Applying supply-and-demand-economics theory to media relations points the way to how PR needs to evolve. 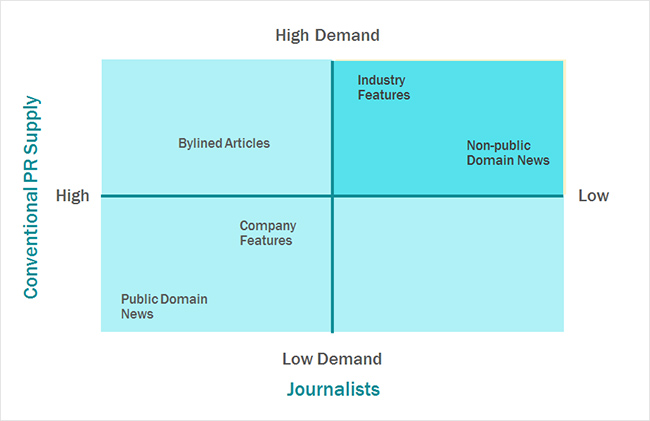 Today’s journalists value content, stories and commentary that are not in the public domain. That’s where we should be putting the bulk of our effort — activities in the upper right-hand quadrant. There’s no logic in PR supply (content) emphasising what journalists demand the least, news releases.

“Communicators need to be conscious of the fact that what has worked for them in the past is losing relevance fast.”

I couldn’t agree more. The more we challenge PR conventions, the stronger our profession becomes.

The news release is a good place to start.

The power of regional communication