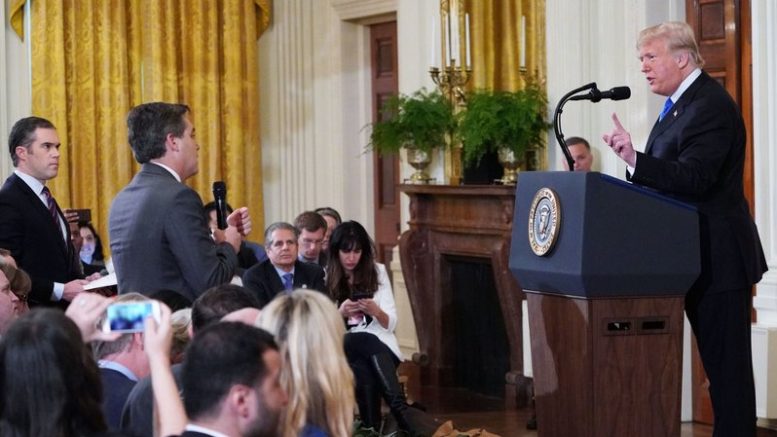 When the President of the United States and the White House correspondent of CNN get into what looks like a bar brawl on video, you have to take note. We can talk about the state of the media, how horrible Donald Trump is, the First Amendment of the US Constitution and how it guarantees the freedom of the press, but when all the usual platitudes and outrageous comments are over, it is time to ask a simple question: Is that how a seasoned journalist and a head of state talk to each other in the world’s supposedly most advanced democracy?

It is easy to sympathise with CNN’s Jim Acosta, whose White House access pass has since been suspended, but I will not go that way. The way he persisted with the questions, including a clear accusation of why the President was dividing Americans, and the way Trump replied with rude personal remarks that included comments on how CNN is run and how it broadcasts fake news left much to be desired on both sides.

As if that was not enough, the reason cited for the suspension of the press pass was that Acosta placed his hand on a White House female aide’s arm as she tried to snatch the microphone from him. The video that led to Acosta’s suspension itself is alleged to be doctored.

First up, it is unprofessional for a journalist to level an accusation or persist beyond a reasonable time with questions at a press conference.  My own feeling after seeing the video was that both Trump and Acosta were playing to their respective galleries. News media loses its institutional quality on such occasions.

That brings me to India. Long before Prime Minister Narendra Modi took office, he once famously and abruptly ended an interview with Karan Thapar after facing an Acosta-like barrage of questions and accusations. I think the right to walk out is an elegant one and sounds better than rude counter-questions or remarks. Modi showed much more presence of mind than Trump did.

Freedom of the press is a constitutional right, but the freedom not to answer a question or even not take a question is the right of every citizen — and that includes Prime Ministers and the President. It is always wise for journalists to remember that their own right does not imply somebody else’s obligation.

A news reporter should preferably frame questions in an attempt to elicit information or comment in a manner that seems objective. Direct accusations, even if resting on factual basis, is not the most professional way — though prime-time TV news anchors everywhere, including India seem to thrive on that. In fact, I think right-wing politicians invoking populist imagery are not much unlike ferocious anchors in pandering to their respective constituencies. Right-wing populism and media populism (and that’s an expression that I just coined) both insult sober discourse and thinking people by putting attitude over substance.

But I also know that press conferences with heads of government and CEOs of major companies are often “rigged” by media advisors and public relations folks. Journalists who ask soft questions or questions kind to the ones addressing the media conferences are often preferred to the difficult ones.

The best conferences are those in which both sides recognise the unspoken tensions and make it all look civil while giving reasonable two-way access and space. Both Acosta and Trump represent a culture in which combative styles are glorified.

That brings me to CNN itself. When CNN arrived on the scene with the world’s first war telecast live — and I am talking of Iraq’s invasion of Kuwait in 1991 — CNN was a brash new entrant in a world where NBC and CBS were known to be relatively sober. CNN acquired a more sober image after Fox News arrived on the scene.

CNN also used embedded reporters to cover Iraq a decade later, embracing a style that implicitly involves taking sides with or being kind to the government in a war zone. CNN’s former star Christiane Amanpour, even while still in the network, criticised her organisation for self-censorship that she linked to both proximity to the George W Bush administration and the rise of Fox News.

Sometimes I think the current incumbent of the White House and the CNN are made for each other in a strange way. Why does this remind me of a World Wrestling Entertainment in which fights are choreographed?

Be the first to comment on "The rise and rise of combative populism: CNN and Trump seem to be made for each other"

Have you ever walked into a police station to build a relationship?

Social media is no longer funny!