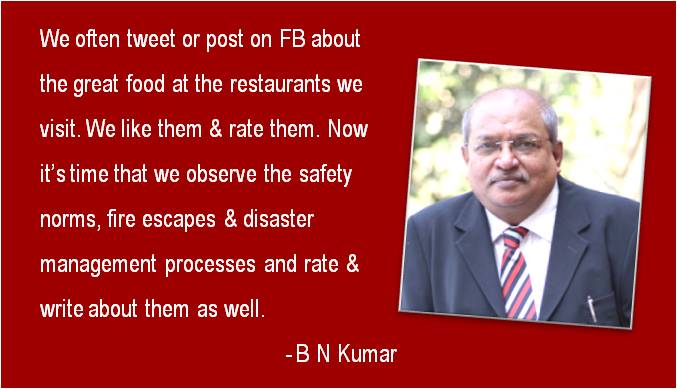 The midnight fire at an eatery in Kamala Mills compound on December 28 is a grim reminder of the urban mess that we have created for ourselves and above all on the need to continuously talk, discuss and pin down the culprits responsible for the unending crisis.

Delhi had prolonged smog that affected the health of the people, Bengaluru continues to fight against potholes and parking problems, Hyderabad and Chennai have floods even with one rain, Pune is unable to overcome the garbage issue and Mumbai the maximum city is full of maximum crisis all the time.

Most of us, communicators, do experience urban crisis almost daily but how many of us communicate about it? It is not enough to murmur in our cocktail parties or simply discuss the same in suburban trains. We need to express better and ensure the message reaches the powers that be.

I am not suggesting that we should come out into the streets. We have a much better means to express. We have the tool of communication. Modi has thrown out a government, succeeded in ensuring his party rule across States. Then we have other communicators such as Big-B who ensure that their voice is heard, taken note of and action is taken.

It is just not about attaining popularity or brand building around you. It’s about making life around us bit smooth and contributing to a better society to live in.

Social Communication? Yes, we at Public Relations Council of India (PRCI) have been successful, though in a limited way, in galvanizing public opinion on some issues of social importance.

Each one of us, from our places of work or social media groups, too can contribute. Let’s take the cases of eating out places and movie halls. These are death traps which have been proven not just once but several times. Don’t we notice small, narrow passages that these places have? Doesn’t it strike us that we could die if a fire mishap takes place here? Don’t we notice the terrible parking lots and the long, serpentine drives to leave our cars?

Often we tweet or post on FB about the ‘yummy’ food at some of the restaurants that we visit. We rate them. Now it is time that we observe the safety norms, fire escapes and disaster management processes and rate and write about them as well.

Communication has to transform from mere feel-good factor to how to make life better, safer than what it is today.

One may well ask: Isn’t it the responsibility of media to write about these social problems?  Yes it is. But media will also pick up threads from social media campaigns. We are often told to ‘think like a journalist’. What does it mean? It simply means that we should keep our eyes and ears open, observe life around us and communicate about it. It could be about a drain cover left open and people falling in and suffering fractures or about narrow passages in multiplexes.

It has rather become a cliché to talk about change, quote Mahatma Gandhi on you being the change that you want to see, Obama’s ‘Yes we can’ and so on and so forth.

I for one firmly believe that mere change isn’t enough. We have to transform ourselves – transform in our thoughts and actions.

Getting back to the subject of urban chaos, we have observed (and continue to do so) the total apathy, lack of understanding and absence of planning for the future. In Mumbai, a road-over-bridge is built to solve traffic problems and the Municipal Corporation begins to add another structure to it to overcome the traffic mess. In Navi Mumbai, a brand new concrete road is built along an industrial belt and in less than three years, the beautiful road is dug up right in the middle to build a flyover.

Everyone today talks about Swachh Bharat and the ritual, annual survey to make your city number one! Does the campaign begin and end with writing of slogans on the walls? What about our individual and collective responsibilities? While in Pune last week, I heard a senior journalist questioning the so-called Smart City tag given to his city. For him, the smart city concept is: going beyond planting some saplings on road dividers or sweeping the streets for a cosmetic change. It is also about smart administration, smart planning, smart people and above all smart media that stands up to the common cause. He talks about a citizen’s campaign against Bengaluru potholes and the way the Chief Minister was forced to act. “I want to see similar public pressure in Pune, too,” he says.

Media raised questions over fire safety during the Upahaar cinema blaze. Media questions BMC and others now in the light of the Kamala Mill compound fire. TV Channels and print journalists scream about building rules during crashes. After that, everything is forgotten as the media rushes for the next breaking news. Isn’t it their responsibility to do a post-mortem and keep raising the issues that concern all of us?

And finally, isn’t it our responsibility to keep questioning in our own way?

My humble request to all my readers is: let’s go beyond the customary New Year resolutions and resolve to work for better cities that we live in. We owe it to ourselves. Let’s transform.

In Anticipation of an ‘Off the Grid’ Generation

1 Comment on "Urban chaos – the need for constant communication"