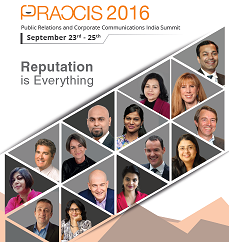 Every year prior to PRAXIS we say bigger and better. This year we have not said much of that but indeed the event is probably the biggest so far in terms of sheer size and scale. Size in terms of number of people attending representing diverse organisations – 500 + from over 170 organisations. Moreover, we have never invited more than three international speakers. This year we invited 15, of which 14 confirmed and 4 backed out in the last four weeks – some professionally and some unprofessionally. But we take it all in our stride.

We have five global consultancy leaders, including Kathy Bloomgarden of Ruder Finn, Aedhmar Hynes of Text 100, Pascal Beucler of MSLGROUP, Alan Vandermolen of WE Communications and Jon Higgins of Ketchum who will present keynotes. They will also be part of a super power panel. We have three association leaders, including Sarab Kochhar of the Institute of Public Relations, Roger Bolton of the Arthur W Page Society and Gregor Halff of the Global Alliance for Public Relations and Communication Management. We also continue with our Editor series where we have Alok Sanwal of the Dainik Jagran Group. In addition to this we have three unique power panels comprising founders and corporate communications heads of start-ups on building reputation, young professionals on creating great content and one consisting of chief reputation officers on how that role is evolving.

The location is unique and is set in the Sahyadri ranges that demarcate the Deccan Plateau and the Konkan coast. It is indeed a tranquil destination for business and pleasure. While all our previous locations have been away from the hustle and bustle of big cities, Aamby Valley stands out as a location that has man-made lakes and natural hillocks surrounding it. I’m sure the weekend ahead will be unique and memorable for everyone participating. A lot of work has gone into the planning of the fifth edition. The event will carry on for two nights as the Fulcrum awards is being introduced at the end of PRAXIS.

This year we put together a professional team of an operations head and a content head in the last three months. The results of that investment will probably be seen in the next edition but a solid start in that direction has been made and a secretariat has been set-up. Another highlight will be the support to young bands. We have fairly established performers in the first four editions. This year we are investing in promoting two young troupes. One is a purely instrumental performance and the other is an acapella performance. These will be followed by a night of music and dancing with a disc jockey in attendance.

The topics focus on the theme Reputation is Everything with thrusts on Creativity, Digital, Storytelling, Technology, Real-Time Marketing and even Middle India. There is a lot of learning that PRAXIS will offer, both from the podium and off it. I’m excited as ever. The Monday before PRAXIS is generally not stressful but you never know what’s in store before we touch down to experience the labour of love. For those who will not be there, watch out for #PRAXIS5.

Perception management for the non-profit: Boon or bane?

Being a boss v/s bossing people around