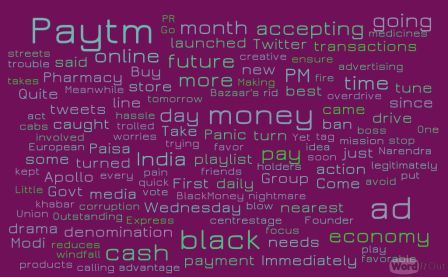 When we got the khabar that our Prime Minister Narendra Modi was going to address the nation on November 8 at 8 pm, we had no idea what was in store for us. Little did we know that it was going to be a bombshell!

The Government caught the country totally unawares, this time, in its drive against black money. The ban on Rs. 500 and Rs.1000 notes was a strong move, indeed.

Immediately after the announcement, social media went haywire – it caught fire with tweets, FB posts, memes, and what have you.

Not to be left out of any action, brands too got into the act – posting and tweeting. Knocking us down with their puns and catchy wit, some brands have managed to turn around the breaking news and flash it in their favor. The unexpected news break got brands to display their creative streak – to get visible, noticed. The ban proved to be beneficial for many brands.

One of the first brands to join the band wagon was Paytm, who incidentally features in Forbes India cover as ‘the winner of Outstanding Startup for the Year’. Their quick retort was clear on their tagline – ‘Paytm Karo’. And, it looked like this wit was going to pay their brand big time. The pain of withdrawing cash from ATMs turned into a windfall for Paytm. The company’s payment network has touched a record 5 million transactions a day!

But, there was a fall out. What Paytm thought was an advertising masterstroke, soon turned into a PR nightmare.  With the tag line ‘Drama Bandh Karo… Paytm Karo’, the ad showed the house-help asking her boss to stop the ‘drama’ and use PayTm for transactions. As the ad was released, Twitter went into an overdrive, and Twitterati trolled Paytm, calling the ad a “horrible and insensitive take on the current plight of the common man”.

A favorable time to put the spotlight on online wallets. And, quite legitimately, the entire focus swirled towards them. MobiKwik tweeted – “Don’t Panic & Go Cashless! Get your friends on MobiKwik & save them from the panic too! Pay for your groceries, bills, cabs & more at ease!” Yet another online wallet did not miss the opportunity to garner attention on Twitter. Trash the cash, just FreeCharge, the brand tweets.

Hypercity chain Big Bazaar came to the rescue of the frenzied citizens, who went into a flap trying to change Rs. 500 and Rs. 1000 notes. Big Bazaar tweeted on November 9 – “Big Bazaar provides alternative payment options for the benefit of our customers. To download future payclick http://bit.ly/f_pay_da ”. On the same day, Kishore Biyani, Founder and Group Chief Executive Officer, Future Group tweeted – “Special for our bigbazaar profit club holders they can prepone 1month of shopping and do 2month of shopping this month from tomorrow onward”. To add to this impression, Big Bazaar’s ad says “No cash, no worries. Many more ways to pay for your shopping”. To the make the best of their Wednesday Bazaar, they tweeted, “Wednesday is here with all new deals at Big Bazaar! Come & avail the best offers on all your daily needs at the nearest Big Bazaar store”.

Saavn created a playlist ‘Paisa’ to join in the brand saga and tweeted – “Money on your mind?! Tune into our “Paisa” playlist at saa.vn/paisa1”.

Social played a different tune. When it came to pulling people out of their dilemma, they announced – “We are still accepting cash. 5 shots = Rs 500, 10 shots = Rs 1000”.  Thus they systematically marketed this scheme to their advantage, by accepting Rs. 500 and Rs. 1000 notes.

All India Bakchod always reduces us to a bundle of laughs. Quite rightly so, for they immediately charged into the social media with a meme titled Rs 500 crore blockbuster – The Wolf of Dalal Street, launched by Namo Films. The visual was unmistakably that of the person in the centre of all the action – PM Modi.

Making a brand connect was Apollo Pharmacy, who kept messaging every day that they are “accepting old Rs 500/1000 notes. Kindly buy all your necessary medicines and daily need products from your nearest Apollo Pharmacy to avoid any hassle”.

Furniture brand Nilkamal launched their ad, which said – “Har problem (A.K.A Black Money) ko sula do!” The ad was rounded off with the line – The only people who should be sleepless now should be the ones with #BlackMoney. #HarProblemKoSulaDo.

With Durex on a mission to be more than just a condom brand, it got into the centrestage with a play on words – “You don’t have the note, but you still can get her vote!” Buy Durex online now, was the sign off.

Yes, it has been a week since the news hit us, some brands still have to join the fray. Come on now, we are waiting! Meanwhile, all our conversations from boardrooms to the streets, revolve around this. That’s how involved we all are. For how long? Take a guess!

Be the first to comment on "Blown by the #DeMonetisation wave"

Business continuity in a crisis