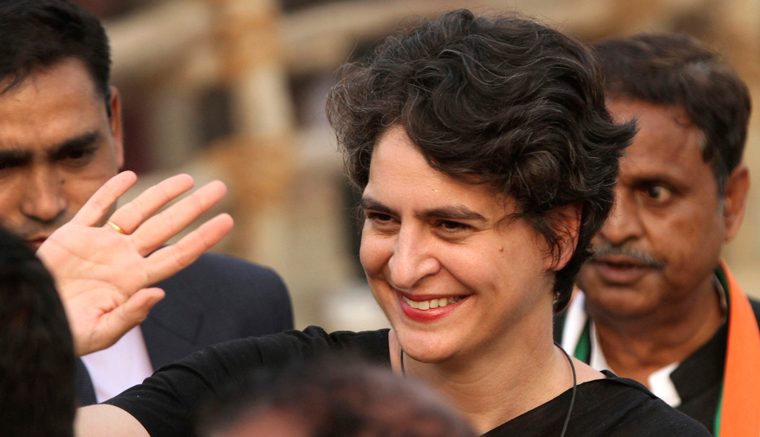 A few weeks ago I made a few predictions of a few campaign tactics that we will almost certainly see in the endgame of the elections. I knew there was a possibility that Congress would unleash their trump card – Priyanka Gandhi Vadra, during this phase (as they did exactly five years ago), but I didn’t think there was a great probability. It certainly did not seem necessary on their part. After all, Rahul Gandhi has been on an upswing in terms of his influence and perception, in the last few months. With the exception of his absence at the Mahagathbandhan rally, he has been at the forefront for the almost significant assault against the leading party. Unusually, he has somewhat earned the spot as the chief face of the opposition, instead of being handed it by default.

So why resurrect Priyanka Gandhi Vadra, and how does it strengthen the campaign against the BJP?

There is really no foreseeable downside to bringing Priyanka into active politics. One possibility is that this was always the plan. Especially as a contingency to a likelihood that Rahul Gandhi does not have the situation under control by this point. Moreover, is it not an eventuality? Gaurav Bhatia of BJP had a snide but accurate way of putting it “She is the mother of the future president of the Congress”, so of course she would have joined sooner or later. Good for the members of the Congress, but this is an illusion of choice. Priyanka is a fifth generation politician from the Nehru-Gandhi family. It is not uncommon in Indian politics for political power and positions to be inherited over generations. But this is the first step towards a tighter grip of this family on India’s oldest political party.

Most successful Gandhi campaigner since Indira?

On the upside, she has a remarkable success rate as far her campaign appearances are concerned. This may be her first official position in politics, as Congress’ General Secretary for Eastern UP, but her presence in politics goes as far back as 1989. As a 17 year old, she campaigned for her father Rajiv Gandhi in Lok Sabha Polls. Between 1999 and 2009, she continued to campaign in UP. In 2014 her campaign presence was the most vigorous, and she took on Modi, Smriti Irani and several other senior leaders of BJP head on. She was also credited to play an important role in negotiating an alliance with Samajwadi Party in 2017 UP elections. That’s a stellar record (certainly miles ahead of her brother’s), and questions our instinctive tendency to call her a seasonal or amateur politician. Granted, that her electoral contributions have been heavily strengthened by seasoned advisers, but the credit cannot be taken away from her for leading from the front, when the stakes were stacked against her.

Roughly half of her political presence has been alongside her brother, which has probably give the party another advantage of erecting Priyanka Gandhi Vadra, as an alternative to Rahul Gandhi. Political ranks and files are usually not as unified as they are made out to be. On the surface the whole of congress apparatus may claim to rally behind Rahul Gandhi unanimously, but there is room and reason for dissent and disagreements. Some mid-level, or even senior Congress members are not proud to stand behind a perpetual upstart and an ideological cretin. So Priyanka Gandhi offers an alternative to such party members. She is an alternative to Rahul Gandhi even for benefactors outside the party (or voters) who are not a 100% on Rahul Gandhi but do not want to support Modi/BJP because of it.

After running the congress party into its biggest defeat ever, Rahul may have done enough to keep Congress alive, but it’s arguable if he has done enough to revive it. The future of the party still sits on a fence. No real ideology, absence of any upcoming leadership, fragmented cadre and a clown at its helm, the party maybe staring into oblivion; a real possibility that it gets wiped out. In the words of some of their own leaders, they will do ANYTHING to win (or stay alive). Priyanka maybe their final hope.

But if that were the case, what took them so long? Why wait for the last phase to bring in your biggest asset? Did Priyanka not find enough incentives to join the party earlier? Does the party believe that Priyanka’s charisma has a shelf life and therefore must be timed optimally? Was it Priyanka’s choice to focus on her family instead of politics? Or is it her husband, Robert Vadra’s dubious business dealings? Does she want to limit the collateral exposure to him, and prevent his criminal scrutiny beyond the ongoing investigations?

Beyond her clout, Priyanka has certainly made the Congress party and its future more interesting.

I now pronounce you ‘Jeevan Saathi’