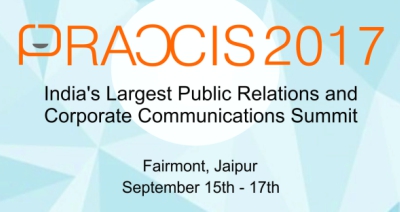 PRAXIS has come a long way since its inception in 2012 and this week all roads and flight routes lead to Jaipur. At the 6th edition we will have a dozen international speakers flying all the way from as many cities, from as far as Chicago, St Louis, Seattle, New York, Paris, London, Madrid, Dubai, Hong Kong, Shanghai and Beijing. We also have special addresses by Indian stalwarts from Coimbatore, Mumbai and Bangalore.

A unique feature about PRAXIS is the passion of not repeating venues, speakers and the live act. This is not easy but we have figured it is not impossible either. So, you will never see a corporate communications or consulting professional a second time on a PRAXIS stage.

First up are the six keynote speakers – We have six of them from six global cities. Our opening keynote speaker is John Saunders, the global CEO of the world’s third largest PR firm – FleishmanHillard based in St Louis, speaking on Staying True to the Calling of Communications. This is followed by Rob Flaherty all the way from New York, the global CEO of Ketchum – the world’s fourth largest firm talking about What it takes to be a Fearless and Fast Communicator. The first day will end with the third keynote by Gabriela Lungu – who is a woman with varied experience in creativity. She has been on the Cannes Lions jury, has built and sold a successful PR firm in her home country of Romania and until recently was the CMO of Notino. She currently leads WINGS – a creative leadership lab. The second day starts with a keynote on being Relevance Obsessed and Relevance Equipped Communicators by Fred Cook, the global CEO of the world’s tenth largest consultancy – Golin, coming from Chicago. This is followed by a keynote on Communicating for Brands in Motion by the global COO of WE Communications, Jennifer Granston Foster from Seattle. The sixth keynote at #PRAXIS6 is by the global CEO of the world’s fifth largest firm MSLGROUP. Guillaume Herbette will talk on Augmented Influence: How a second technology revolution is changing the PR business once again.

All the keynotes will be followed by conversations with communications professionals ranging from Ipshita Sen of Adfactors, Tara Rogers-Ellis of Mojo PR, Aniruddha Bhagwat of Ideosphere, Aakriti Bhargava of Boring Brands, Gaurav Bhaskar of Google and Nandini Chatterjee of PwC respectively.

In addition to this, we have six power panels, the first one is on Independent PR firms in India. The panel is moderated by Girish Huria of ebay India and comprises of PK Khurana of Quik Group, Xavier Prabhu of PRHUB, Ruby Sinha of Kommune and Pooja Pathak of Media Mantra. The panel on Healthcare Communications will have three senior in-house specialists – Aparna Thomas of Sanofi, Jyotsna Ghoshal of MSD and Vaishali Iyer of Novartis. This is moderated by Aman Gupta of SPAG. We have Arun Sudhaman of The Holmes Report from Hong Kong moderating two panels. One on Corporate Communication which includes Debasis Ray of Tata Trusts, Nitin Thakur of Max India, Shaily Vaswani of VFS Global and Poonam Kaul of PepsiCo India. The other on Creativity in Asia with Margaret Key – APAC CEO of BM and Darren Burns – APAC Chair of Creativity and President, China at Weber Shandwick. Our annual youth panel will be moderated by Sharif Rangnekar and will feature Madhurjya Kotoky of Autodesk, Sheetal Singh of Micromax, Deepa Jayaraman of H+K Strategies and Manas Mrinal of Skateboard Media. The sixth panel is a greeting at the signature vote of thanks with all volunteers led by Divya Singh of UST Global and Falguni Patel of Simulations – the co-chairs this year.

There are six special sessions of which two are conversations, two are master keynotes, one is Partner talk by PRCAI and Times Internet on their new offering Brand Wire. The last one is a series of Felicitations. The special sessions include Dr Pragnya Ram – Executive President of the Aditya Birla Group in conversation with Meena Vaidyanathan of Niiti Consulting on Role of Communications in Building Communities & Jose Manuel Guardado from Spain – Chair of the Global Alliance of Communication Management in conversation with Radha Roy of Ruder Finn India on the Challenges facing Public Relations. There will be master keynotes by Abhijit Bhaduri and Padmashri Arunachalam Muruganathanam. Find out more about these gentlemen online.

The live concert this year is The Raghu Dixit Project and the anchor for the sixth consecutive time is Kiruba Shankar. We are confident that the summit will be a great experience.