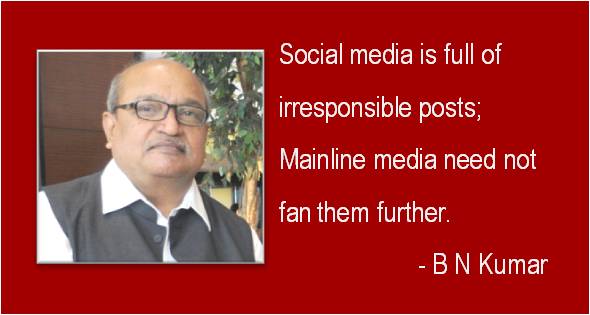 Just as adverse media reports about two warring corporates fuel the fire between them, news and negative comments about two countries do harm the relationships between the nations. I am not at all suggesting that news and comments should be suppressed in a democratic society. As Washington Post says, Democracy Dies in Darkness!

I am a trained War Correspondent – trained to be battle ready and report when the nation is at war. At the same time, I am also mentally trained to appreciate the price the nations pay for war. Mumbaikars would remember that the Bangladesh Refugee Cess of 15 paise imposed on BEST bus tickets continued for years after the 1971 war.  According a report in The Afternoon Despatch & Courier, the additional tax collected in 2015 alone amounted to Rs 17.65 crores.

Political parties often whip up passions against neighbouring countries and indulge in jingoism and a section of the media fans it for their TRPs and readership, which all of know, are short-lived  like any film song of this era. We from Mumbai Press Club were in Karachi and Hyderabad (Sindh) in November 2011 as part of the first ever formal media delegation that visited Pakistan. It was also part of the exchange programme between Mumbai and Karachi Press Clubs. Our experience was memorable and all of us would cherish for years to come.

Apart from most journalists that we met, the civil society, businessmen, educationists  and even the small shop owners were all very, very enthusiastic about promoting good neighbourly relationships. No one talked about wars. While journalists were keen about exchange of information, the chambers of commerce and the stock exchange showed great interest in trade between India and Pakistan. Of course, the man in the street was more interested about updates on Bollywood stars than anything else.

Sample this: A kurta shop realised that I hailed from Mumbai and asked me if I had ever met Shah Rukh Khan. When I said yes, his next question was if ever shook hands with SRK. And when I said yes again, his immediately held my hand and kissed on the back of my palm. I was moved. My co-delegates were also given similar warm and friendly treatment and offered extra discounts in the bazaars because we all came from India.

Yes, Kasab, terror attacks and Kashmir were among the talking points at our meetings with intellectuals. One of them even said: “Bhai saahab, certain people from either side will always be interested in keeping the Kashmir flame alive for their narrow gains. Otherwise, this issue would have been resolved ages ago. Let’s talk about improving communication between the neighbours as neither of will benefit out of this stupid strife.”

Similarly, Pak media delegates to Mumbai showed a lot of interest in developments in India. They visited BSE and enjoyed hospitality of then CM Prithviraj Chavan and late deputy CM R R Patil. The BJP city spokesperson also addressed them.The peace talk continued at Mumbai Press Club where the Karachi-based NGO, PILER, (Pakistan Institute for Labour Education and Research) suggested to Indian and Pak media to refrain from referring to cricket and hockey teams from both the countries as traditional arch rivals.

Coming back to my point, communication is also journalism; why should the media build a war-like situation during sporting events? Be a sport. Shaking hands or sharing jokes at the end of the matches is supposed to ease the tension that built during the game. Why should anyone take them as indications of something being amiss? Border skirmishes are bound to go on as long as there are borders of this type and reporting about those incidents can also go on. But sports reporting need not be akin to war reporting.

Social media, as it is, is full of irresponsible posts. Mainline media need not fan them. Journalism is about reporting facts that are sacred and certainly not about trolling. Masala Journalism could be okay as long as the spices add to the taste. I am sure most of who watch prime time news wars would agree with me that India and Pakistan should have gone to war at least hundred times during the last year alone!

Disclaimer: These views published here are those of the author alone and do not necessarily reflect the views of the publisher.

2 Comments on "Communication for Peace & War"

In Brands, We Trust

Have you ever walked into a police station to build a relationship?